Deprecated: Non-static method JSite::getMenu() should not be called statically, assuming $this from incompatible context in /home/suvrodev/public_html/templates/gk_musicstate/lib/framework/helper.layout.php on line 150

Deprecated: Non-static method JApplication::getMenu() should not be called statically, assuming $this from incompatible context in /home/suvrodev/public_html/includes/application.php on line 539


He is the only son of Mr. Sailesh Ranjan Dev & Late Mrs. Arati Dev. Suvro dev has four sisters.He got married to Tumpa dev in the year 2005. He is a proud father of only son Shreyan dev. Suvro Dev also nephew of Mr. Sujeya Shyam the famous music director , He has inspired him a lot .

Suvro Dev is undeniably a popular name in the Bangladeshi music industry. Ever since his first audio album titled “Hamelin-er Shei Banshiwala” was released in 1984, he has captured the hearts of many Bengali music fans. To date he has produced and recorded over 30 albums, he informs.

“The album 'Lolita' features Sylheti folk songs which date back hundreds of years. "I collected these songs from Bidit Lal Das -- a revered singer from Sylhet -- and rearranged them, combining Latin American, Indian and Arabic elements," asserts Dev.

In 1991, Dev made the first music video of his hit number “Shesh Chithi”, which was shot in Sweden. His popularity reached greater heights when in 1997 ATN Hindi (India) aired the “Suvro Dev's Show”, where a number of his music videos were aired.

"In my opinion, RD Burman (India) and Jean Michel Jarre (France) are the two greatest composers,” he adds.

Dev has a penchant for both cricket and football. He composed and performed the theme song “Cricket Cricket” of the Mini World Cup tournament, which was held in Dhaka in 1998. The socially aware artiste composed the song “Shoth Manush Kokhono Acid Chhorena” for acid victims. The song was aired on BBC on July 22, 2000.

Dev along with Bollywood superstar Aamir Khan were selected as the brand ambassador of PEPSI International through a popular star selection round held in South-East Asia in 1994. Dev was invited to the Bollywood Music Award held at Nassau Coliseum, New York, USA in 2000, where he performed alongside AR Rahman, Lucky Ali, Kavita Krishnamurty and Hose Feliciano. He has also performed in many other countries.

"My only dream is to popularise Bengali music globally," says a confident Dev. 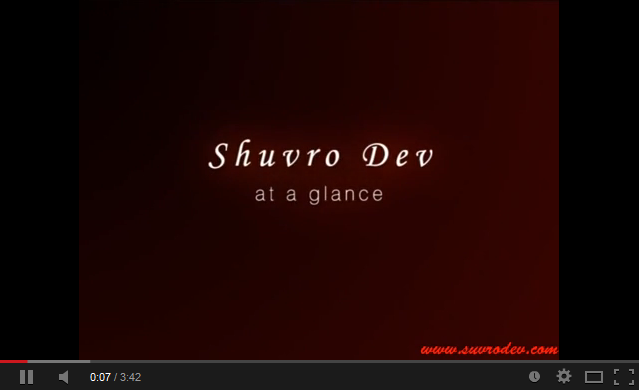 Deprecated: preg_replace(): The /e modifier is deprecated, use preg_replace_callback instead in /home/suvrodev/public_html/libraries/joomla/filter/input.php on line 652

Deprecated: preg_replace(): The /e modifier is deprecated, use preg_replace_callback instead in /home/suvrodev/public_html/libraries/joomla/filter/input.php on line 654